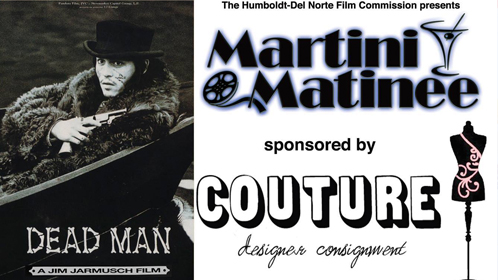 The Humboldt-Del Norte Film Commission and the Eureka Theater present another classic in our film series featuring movies filmed in the Redwood Region, Martini Matinees, sponsored by Couture Designer Consignment!

Jim Jarmusch’s 1995 cult Western film Dead Man stars Johnny Depp in the role of William Blake, an accountant who embarks on a spiritual, violent quest through the American West. The film’s score was composed by Neil Young, improvising on electric guitar as he watched the film.

Like the Film Commission's other community film series, Movies in the Park, our monthly Martini Matinee screenings are FREE! Of course, donations will be accepted!

The bartenders at the no-host bar will be mixing up classic and themed martinis for you to enjoy while you watch classic movies on the big screen. Beer, wine, and concessions will be also available, as always. The proceeds go toward the restoration of the theater!