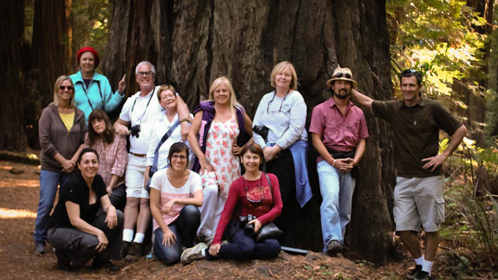 The Humboldt-Del Norte Film Commission held its first ever film related FAM Tour at the beginning of this September.   FAM Tours, or what is otherwise known as familiarity tours, is a tool used to target groups when showing casing what a region or area has to offer in many different industries.    The Film Commission, through a grant from Headwaters Fund and contributions from community partners, was able to offer its first ever FAM Tour to nine Location Managers from Los Angeles.  “Location Managers are the first connection to the film, tv, and media industry,” said Cassandra Hesseltine, the Film Commissioner of Humboldt and Del Norte Counties, “They are the driving ship from finding possible filming locations to pitching the locations to the director to managing the location during filming.  They are very important in the film world.”

The nine location managers spent three days traveling through both Humboldt and Del Norte Counties visiting the spectacular film friendly locations the region has to offer.  The big trees, rocky beaches, and unique architecture of the many different towns where among some of the favorite features on the tour.  Not only did the Location Managers tour the region but they ate in restaurants, met local crew, and became acquainted with the region’s film friendly resources.  “When a shoot goes on location, not only do they need the location to be a perfect fit for their project but they need to know the location has the infrastructure to handle the shoot and we were able to show them that we do,” said Hesseltine.

The goal of the tour was to allow the Location Managers to experience firsthand what it looks like so far from Hollywood and why it would be worth bringing a production here.  At a time when most of California is in a draught, the Location Managers were in awe to discover that the area had some of the only green locations throughout the state.   In the past ten days since the tour, the Film Commission office has already received two film inquiries directly related from the FAM Tour.  “Obviously, we were expecting a project to directly come from the FAM Tour in the future, but to have inquiries so soon after the tour is a testimony to its success,” said Hesseltine.   Another measure of success is the dollars that film productions spend in our region.  With the new tax incentives being passed by Governor Brown this month for the state of California, the Film Commission feels strongly that productions will increase in our region as will the amount of dollars that benefits our community.