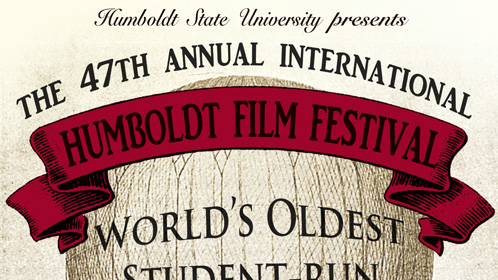 Known internationally as the “Longest Student-run Film Festival in the World."  Began in 1967 by HSU Students, it’s now in its 47th year.

Joel Moffett, an HSU MFA in Theatre Directing alum who has taught screenwriting and directing at the prestigious AFI (American Film Institute) in Los Angeles for 9 years and is currently Associate Professor in the Academy for Creative Media at University of Hawaii at Manoa.

Anayansi Prado, award-winning documentary, Latina filmmaker, who  founded Impacto Films, which seeks to educate and train Latino youths in the art of filmmaking in developing countries. Her first documentary, MAID IN AMERICA, about Latina domestic workers in LA, was broadcast nationally on PBS’s program, “Lens”.

Maria Matteoli, a native of Humboldt and HSU alum, is an award winning filmmaker. She has produced over 50 short films, music videos, commercials, and campaign documentaries. Her first feature, THE WINE OF SUMMER, starring Sonia Braga and Marcia Gay Harden and filmed partially in Eureka, recently won top prize in  its category at the Douro Film Festival in Portugal. She is finishing her latest script for a feature film based on a true story set in the 1870’s.