The World Premiere of "The OX" 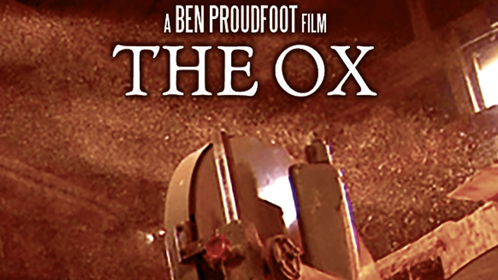 Hosted by Michael Fields, the evening’s events will also include local musicians, an exclusive retrospective on Blue Ox Millworks, and a Q&A with filmmaker Ben Proudfoot, Blue Ox owners Eric and Viviana Hollenbeck, and more surprise guests. Admission is free, and all ages are encouraged to attend.

Watch the teaser and read more about the film.

What: The World Premiere of THE OX

Old Town Eureka, on the corner of 2nd and "C" | Google Map

Note: Due to limited seating, it is encouraged to RSVP, but not mandatory.

At the age of 15, Proudfoot began studying sleight-of-hand magic and over the next three years, won both the Canadian and International Championships for legerdemain. At 16, he joined the Magic Castle Junior Program in Los Angeles, traveling to meetings several times a year, paying for it by performing at children’s birthday parties.

Proudfoot's passions shifted to filmmaking and was subsequently accepted to the University of Southern California's School of Cinematic Arts in Los Angeles. In 2011, Proudfoot wrote and directed the short film Dinner with Fred which garnered dozens of festival awards worldwide and won him two Best Director awards and a qualification for the 2012 Academy Awards© for Best Live Action Short Film. In May 2012, Proudfoot directed a short documentary entitled ink&paper that found an international audience of over one million people on Vimeo and caught the attention of Sony Pictures Television, who optioned the idea.

In 2012, Proudfoot founded Breakwater Studios Ltd. and established a production office in Los Angeles in the building where Walt Disney first started his company in 1923.

Breakwater Studios is a young, ambitious and independent–minded film production company located in Los Angeles with ongoing international productions in Nova Scotia, Canada & Rwanda, Africa. Film producer and director Ben Proudfoot founded the company in early 2012 as an incubator for young talent. THE OX is the second in a series of craft documentaries by Ben Proudfoot, the first being the award-winning ink&paper, about the last letterpress shop in Los Angeles.

Blue Ox Millworks - Celebrating 40 years of quality custom millwork. Blue Ox is a fully functioning Victorian job shop which produces custom architectural millwork, as well as interior and exterior details for historic homes and new construction projects around the United States. But it's more than that. Blue Ox is a school, a historic park, and a haven for craftsmen.

Blue Ox is the product of four decades of work from master craftsman Eric Hollenbeck and his wife Viviana. It is a place where the craftsmanship techniques of the last century are preserved and quality takes precedence over mass production. It's also a place where community comes together and lives are changed in positive ways. Enthusiastic support for Blue Ox comes from many sectors of Humboldt County society, and has expanded to include national and international recognition, including being honored by President Clinton in 1994 and by a resolution before the California legislature.