Movies in the Park: Thor:Ragnarok 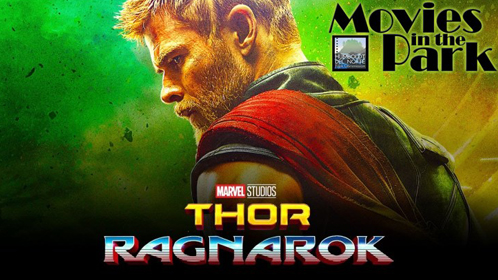 The Humboldt-Del Norte Film Commission invites you to come to Eureka’s Sequoia Park for the second 2018 Movies in the Park outdoor movie screening. Marvel's 'Thor:Ragnarok' (2017) will be the feature film for the month of June.

"Imprisoned on the other side of the universe, the mighty Thor finds himself in a deadly gladiatorial contest that pits him against the Hulk, his former ally and fellow Avenger. Thor's quest for survival leads him in a race against time to prevent the all-powerful Hela from destroying his home world and the Asgardian civilization."

The public is encouraged to dress warmly and arrive at 7:00 PM to enjoy music and find a place on the lawn for blankets and lawn chairs. The evening continues with Loony Tunes cartoons, and the feature film starting at dusk, around 8:45 p.m., on Saturday, June 23 at 3600 W Street in Eureka. Popcorn, candy, and refreshments will be available by donation. There will be an information table set up on site with Film Commission volunteers answering questions about the non-profit organization’s mission of promoting film in the Redwood Region and the services offered to film productions.