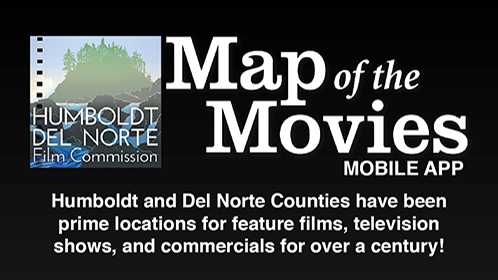 Get the IOS version here!

The Humboldt-Del Norte Film Commission is excited to announce the launch of their Map of the Movies mobile application. The new app is based on the popular printed map brochure featuring local filming locations from the past century in Humboldt and Del Norte Counties. Film tourism is one of the film commission’s focuses, as the economic benefit of film tourism can far outweigh the initial spending by film productions in the region. The app is aimed directly at promoting film tourism based on the rich film history of the Redwood Region.

The app features dozens of markers at filming locations with information on each movie, movie poster images and links to IMDB, as well as Youtube for viewing trailers. Each marker location is marked on the app and allows users to navigate to each using mobile navigation.  In addition to the movie markers, the app also includes locations of local accommodations and restaurants to visit while following the map to help find a place to stay or eat along the way. The app is the first of its kind focusing on local points of interest, coupled with the ability to search, find, and navigate to hotels and food within the app.

Since 2014, the film commission has printed and distributed approximately 70,000 maps to local hotels, museums, and parks. The Map of the Movies has also been available on the film commission’s website as a PDF and as a custom Google Map. With the printed maps, PDF, and views online, the map has been seen over 225,000 times. Many tourists have extended their stays in the area to explore the map and those who distribute it have said that is the most popular activity brochure handed out. The immense popularity of the map led the film commission to creating the app to make it even easier from locals and tourists alike to access the map and more importantly make it easier to navigate utilizing their mobile phones.

In the future, the film commission plans on updating the app with images of filming locations, movie stills featuring the locations, an audio tour and more. Additional markers will also be added to expand the map as more movies are filmed in the region.

The map’s markers are predominately placed outside, but the commission would like to remind the public to remain socially distant while exploring and wear masks inside at the few locations where the markers are located within buildings. In addition to these reminders, the commission asks users to obey all COVID protocols required at all business they visit while following the map.

The free app is now available in the Apple iOS app store, with the Android version coming to the Google Play store in the next few weeks.