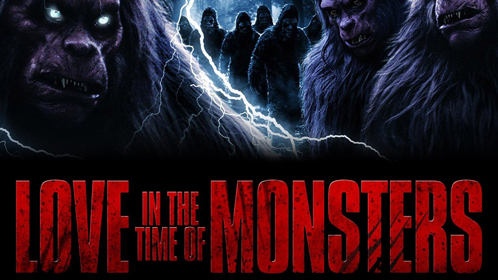 Local scenes a hit with audience

Crescent City gets taste of Hollywood at movie screening

People inhaled popcorn and slurped soda as the lights went down.

It seemed like any other night at Crescent City Cinemas on Saturday night, but when a familiar Paul Bunyan statue loomed onscreen, a packed theater erupted into applause. Cheers broke out again when Crescent City native Alex Gastineau delivered his first line and when “shot at the historic Patrick Creek Lodge in Gasquet, CA” appeared in the end credits.

More than 200 tickets were sold for the Crescent City screening of “Love in the Time of Monsters.”

“This is such a dream come true,” said director Matt Jackson. “This movie has been in the works for so long and to come back to show people and to have them like it is amazing.”

In the film, Patrick Creek Lodge stands in for Uncle Slavko’s Funtime Lodge, a tourist trap that specializes in Bigfoot tours with costumed actors. But the Funtime Lodge has a sinister side that comes out when the Bigfoot actors become contaminated by toxic waste and turn into man-eating zombies.

Jackson, who is influenced by Edgar Wright and John Carpenter, said he wanted to make a movie that has the feel of a B-movie from the 1980s. The film also taps into local legends of Bigfoot.

Writer Mike Skvarla had already written the movie when he came across Patrick Creek Lodge and Del Norte’s redwoods. According to Jackson, Skvarla stumbled upon Trees of Mystery on U.S. Highway 101 north of Klamath about three years ago.

“We talked about using Trees of Mystery and we realized that Paul’s big hairy face should be the opening shot of the movie,” Jackson said. “It’s something goofy that could kill you.”

Twenty members of the film’s crew came from Los Angeles to show the finished product to Del Norte County. In the lobby, Sasquatch cavorted on the red carpet while actor Doug Jones clowned around with the rest of the cast in front of the media wall. Every now and then he took time out to pose with a fan.

Jones, who has also appeared in “Hellboy” and “Pan’s Labyrinth,” said he was introduced to “Love in the Time of Monsters” through his close friend Douglas Clayton, the movie’s casting director. He said he read the script and thought it was hilarious, and since it included a trip to the redwoods, he couldn’t pass it up.

“A movie like this is awfully silly, awfully gratuitous, but it knows it’s these things,” Jones said. “It was a rollicking good time.”

Cheering his son on was Crescent City Councilman Ron Gastineau, who appeared in an Uncle Slavko T-shirt.

Other Gastineau family members, including Alex’s mother, sister and grandmother, were scattered throughout the movie theater. Ron Gastineau said he was impressed with the turnout at the screening and noted that the event is a “boon” for the community.

“It shows what kind of community support we have for local actors and the economy,” he said. “Also, something like this rocks!”

Jennifer Young, a member of Lighthouse Repertory Theatre who appeared as an extra in the film and helped with local casting, worked just as hard to organize the movie’s Del Norte debut. Despite being in a car wreck the night before, Young greeted crew members and flitted between the door, where volunteers checked tickets, and the T-shirt booth.

“I feel great,” she said. “It’s not very often you get something like this. I’m ecstatic.”

Jackson said “Love in the Time of Monsters” is in the process of being entered into the film festival circuit.