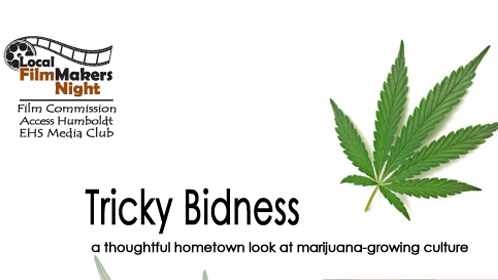 Filmed in Humboldt County, California, this film tells the story of the city of Arcata’s experience with marijuana and it examines the town’s struggle to establish sensible regulations for its biggest covert industry.

As more states legalize marijuana use, local communities must grapple with a number of unanticipated consequences. Tricky Bidness takes a nuanced and sometimes funny look at the complexities of marijuana, culturally, legally and personally from the people who have lived with it in their community for over 40 years.

The film is a primer for the history of cannabis in the US and ends with a few innovative solutions developed by the Arcata City Council to the problem of grow houses, including the recently implemented Excessive Electricity Use Tax.

For filmmaker JoAnn Schuch, a resident of Humboldt County since 1989, a custom woodworker, designer, and community activist, the catalyst for making this first-time-ever documentary was witnessing the changes brought by the explosion of marijuana grow houses in Arcata.

Filmmaker Lynne Canning has spent most of her life as a political activist and community organizer. She was drawn to Arcata in the early 80's for its natural beauty. Lynne fell in love with Arcata's community spirit and progressive approach to dealing with complex issues, and served as a Planning Commissioner and City Councilor from 1988-1994.

The event will take place at the Eureka High School Lecture Hall (Humboldt and K Sts.). Doors open at 6:30 p.m. Screening starts at 7 p.m. Admission is $5 per person and all are welcome to attend.

Following the screening, attendees can enjoy Q & A session with the filmmaker, movie trivia, prizes, and a reception at the adjacent Access Humboldt's Community Media Center.