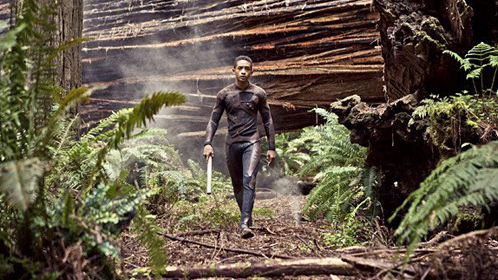 Jaden Smith walks in a redwood grove in Humboldt Redwoods State Park, where part of the Columbia Pictures movie "After Earth" was filmed last year. (Alan Silfen / May 21, 2013)

When producers of the upcoming science fiction movie "After Earth" wanted to create an image of what the planet might look like 1,000 years in the future, location manager Dow Griffith knew just the place.

He immediately thought of the mystical redwood forests in Northern California where his parents had taken him on a camping trip as a child.

"I wanted to be able to evoke that sense of what the Earth would be like a thousand years after man has left, and I always felt that these enormous trees would say that in one shot," Griffith said in an interview from his Santa Monica home. "I said, 'You know, the redwoods might be a really good option.'"

As a result of Griffith's scouting work, about a third of the M. Night Shyamalan movie starring Will Smith and his son, Jaden, was filmed in Humboldt Redwoods State Park, where filmmakers had to take special precautions to film amid groves where trees are 1,100 to 1,600 years old. The Columbia Pictures movie, which will be released May 31, also was filmed in Costa Rica; Moab, Utah; and Philadelphia, where interior sets were built.

Pennsylvania approved a $12-million film tax credit for "After Earth," but the movie did not qualify for a tax credit in California because its budget exceeded $75 million. Only movies below that threshold are eligible for state subsidies.

Nonetheless, California did offer something of value not available anywhere else — ancient redwood groves where some trees reach nearly 380 feet and are more than 20 feet in diameter.

The coastal redwoods of Humboldt and Del Norte counties have appeared in many movies, among them the 1938 film "Valley of the Giants," "E.T. the Extra-Terrestrial," "Star Wars: Episode VI — Return of the Jedi," "The Lost World: Jurassic Park," "Outbreak" and the 2001 movie "The Majestic," starring Jim Carrey.

But "After Earth" represents the first major feature film in many years to shoot in the area, which has mostly attracted commercials, indie features and nature programs.

"This was our first big movie in almost 10 years," said Cassandra Hesseltine, film commissioner for Humboldt and Del Norte counties. "So when they called and said, 'We have an M. Night Shyamalan movie with Will Smith in it,' I said, 'I'm going to scout every day.'"

Hesseltine spent nearly a week in April 2012 visiting more than two dozen redwood groves in Humboldt and Del Norte counties with Griffith, who snapped photos of the various redwoods.

Griffith took some 5,000 photos, including some of Hesseltine posing in front of giant trees in Humboldt Redwoods State Park to give a sense of the scale of the trees. The images helped convince Shyamalan and production designer Tom Sanders that the park would be the ideal setting for the place where the characters played by Will and Jaden Smith crash-land and confront an evolved animal species that rules the planet.

The production worked for four weeks last spring preparing for a nine-day shoot in several groves, spending more than $2 million on food, gas, lodging and other expenses in Eureka and surrounding communities, Hesseltine estimated. "The economic stimulus that a big movie like this brings to our area is huge," she said.

Filmmakers had to follow strict guidelines to minimize their impact on the largest collection of old-growth redwoods in the world.

The crew was not allowed to bring anything with an engine or motor onto the site, so they ran 2,000 feet of cable to a road where generators and trucks were set up. Ferns were taped so they wouldn't get trampled on. And filming was limited from 6 a.m. to 6 p.m. so the marbled murrelets and other birds that inhabit the area wouldn't be disturbed.

"They gave us very strict guidelines, but they were unbelievably helpful," said Doug Dresser, another location manager who worked on the film.

When a warming tub used by actors filming a river scene broke down, a retired forest ranger offered to fill the tub with buckets of hot water he delivered from a nearby ranger station, Dresser noted.

The extra precautions were well worth it, he added.

"We wanted a place that looked liked it was untouched by humanity," Dresser said. "This forest had a spectacular scope and really was very cinematic in every single way."