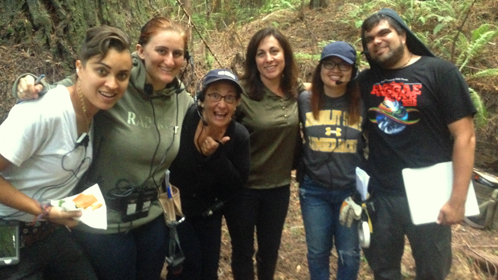 This summer has been unusually busy with film shoots! Since the first of June, there has been a total of nine shoots in Humboldt and Del Norte counties that usually only receives on average twenty shoots a year. The project types have varied from commercials to music videos to feature films.

One of the most noteworthy productions wrapped this past weekend, the independent feature film Swiss Army Man starring Daniel Radcliffe (best known for Harry Potter, The Woman In Black, and Trainwreck) and Paul Dano (best known for Little Miss Sunshine, There Will Be Blood, and 12 Years A Slave). This is the first full length movie for the directing duo, DANIELS (Dan Kwan and Daniel Scheinert), who are best known for their award winning music videos (including DJ Snake and Lil Jon's Turn Down For What).

The six day shoot in Humboldt County is estimated to have brought in $83,200 direct dollars into the community. The film was shot entirely in California and is the recipient of the California Tax Credit Program. According to the production, if it had not been eligible for the tax credit it would likely have filmed in another film incentive state like Georgia or Louisiana.

Todd King, the line producer of Swiss Army Man, said he couldn't be more happy with the local crew. The production hired a location manager, catering, production assistants, and onset medics from the area and were genuinely impressed with the quality of the work performed. King, also, found the Film Commissioner, Cassandra Hesseltine, extremely helpful and commented, "went the extra mile to make things happen." Hesseltine, says that she is also impressed with the hard working local crew as well as with the monitors from the locations (Trinidad Land Trust and the State Park Rangers), "who were so accommodating and film friendly! This makes a huge difference in regards to productions wanting to return with other projects."

The local filming commences principle photography for the production. Lauren Mann, one of the producers of Swiss Army Man, when asked how she liked filming in the redwood community commented, "Couldn't think of a better way to end the film!"