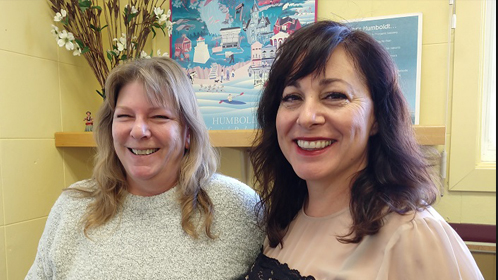 Debbie Damiano, Administrative Analyst at Humboldt County's office of Economic Development, has
been awarded the California on Location Award, also known as a COLA, for County Public Employee
of the Year. The Humboldt-Del Norte Film Commission nominated Damiano for the award for her
work permitting a 2019 JEEP print advertising campaign that utilized numerous Humboldt County
locations. Damiano has been employed by the county for 30 years and will be retiring on January 10.
The COLAs are presented by Film Liaisons in California Statewide, FLICS, to recognize Location
Managers, their teams, and public employees for their efforts for filming in California each year.
Humboldt-Del Norte Film Commissioner, Cassandra Hesseltine, and film commission Marketing
Manager, Nate Adams, were on hand to accept the award for Damiano, who could not attend the
ceremony. The Commissioner also accepted the COLA for Location Print Media Manager of the Year
on behalf of Mike Floyd, Location Manager for the JEEP ad campaign.
“Debbie has played an important part in making our region film-friendly.” said Commissioner
Hesseltine. “No matter her workload, Debbie ensured film permits would be processed quickly and was
always a joy to work with, even on the most complex permit applications. She deserved this COLA.”
Other notable winners for include; Once Upon a Time in Hollywood, Location Manager of the Year,
Studio Feature; Location Team of the Year, Studio Feature and Assistant Location Manager of the
Year, Feature Films; Dolemite Is My Name (Location Manager of the Year, Independent Feature);
Ballers (Location Manager of the Year, Episodic TV, half-hour); Dollface (Location Team of the Year,
Episodic TV, half-hour); and Marvel's Agents of S.H.I.E.L.D (Assistant Location Manager of the Year,
television).
Netflix chief content officer Ted Sarandos, received the Golden Slate Award from the California Film
Commission and FLICS for his commitment to filming in the state. His award was presented by John
Stamos, known for his role as Uncle Jesse on the TV Full House and Netflix's Fuller House.
This year's award ceremony was the twenty-fifth annual event and was held at the Universal City
Hilton in Los Angeles on December 15, 2019.