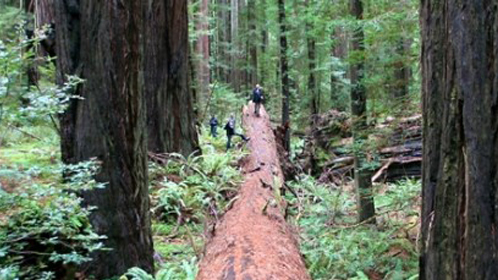 Below is the article on Doug Dresser, location manager of After Earth.  To visit the original story which contains pictures, "click" the Location Guide link here.

LATEST FROM THE LOCATION GUIDE

Douglas Dresser’s career in location management goes back to the early 90s and hit television drama Renegade. Over the years he has worked several times with Quentin Tarantino and most recently with M Night Shyamalan on After Earth.

After Earth is set to be one of the big science-fiction films of 2013. The movie stars Will Smith and his real-life son Jaden as a father and son who crash-land on Earth a thousand years after the planet was abandoned by humanity.

“We wanted to tell a story of what Earth would look like after we had left and what it may return to,” Dresser explains: “We wanted pristine rainforest (Costa Rica), giant redwood trees (Humboldt County, California – home of the giant redwoods), desert environments that looked like another planet (Moab, Utah), the tallest cliff faces (Switzerland) and glacial plains (Iceland). We were able to shoot in some of the best locales on Earth.”

Logistical movements between the various locations were among the biggest challenges. Once the filming spots had been selected, Dresser had to convince the relevant authorities that these areas of natural beauty wouldn’t be damaged during the filming process. “Those pristine locations come with rules, regulations and restrictions to protect them, and understandably so,” he adds.

California filming involved a trip to Humboldt County and Rockefeller Grove, which is the world’s largest continuous growth of giant redwood trees and “the ideal location for what the Earth would look like if undisturbed for a thousand years”.

We could not bring in generators, powered vehicles or lifts into the area we wanted to film, so we had to park our generators and equipment in an area over 1,800 feet away and carry everything in by hand.

The redwoods’ thick canopy resulted in low-light conditions on the forest floor. Usually this would be tackled with generators and lights, but the production team was restricted in the use of loud mechanised equipment because of environmental concerns about an endangered bird species indigenous to the area.

“We could not bring in generators, powered vehicles, or lifts into the area we wanted to film,” Dresser recalls, “so we had to park our generators and equipment in an area over 1,800 feet away and carry everything in by hand. We had limits on the heights of lamps and lighting, and had strict hours of filming and noise levels.”

He credits the Park Rangers for being “helpful” and “informative” during the shoot, and describes Rockefeller Grove itself as “one of the most magical places on Earth”.

Dresser’s film industry career began with a job at the San Diego Film Commission when he was still at university. His time there “was a good way to see what a Location Scout does” and this led to his half-year stint on Renegade.

A position as a Location Assistant on modern vampire B-movie Western From Dusk Till Dawn in the mid-90s gave Dresser his first big break. It was a high-profile feature directed by Robert Rodriguez from a screenplay by Quentin Tarantino who had just taken the film industry by storm with Pulp Fiction. The movie put Dresser “on the path” to an eclectic career as a Location Manager.

Over the ensuing years he worked with Tarantino again on Jackie Brown and then Kill Bill (above). Here one of his tasks involved scouting Mexican brothels for a key scene where Uma Thurman’s Bride seeks vital information on the whereabouts of the villainous Bill. Dresser found a location he thought might work and took photos of the employees going about their various housekeeping tasks, before showing them to Tarantino.

“When we got to the location in Mexico,” Dresser says, “and after we had cleaned and dressed the set, Tarantino asked ‘Where are all of the people from the photos?’ We quickly found them and he placed them in the exact place they had been sitting in my scout photos. He remembered where everyone was sitting. He placed the actors in the middle and shot the scene – was an amazing thing to see.”

Dresser laments the increase in runaway productions from California – “They don’t really shoot movies here anymore” – but while the growing trend to film further afield takes him away from his family, he’s also grateful that it’s given him terrific opportunities to see more of the world. He’s scouted extensively in Central America and, as Supervising Location Manager on Oscar-nominated feature The Kite Runner, was given the task of shutting down the city centre in the Chinese city of Kashgar. It was a task that involved endless meetings with local politicians and a lot of Chinese whiskey, and culminated in the staunch support of 50 policemen to safeguard the filming location.

“I like meeting people of all socio-economic levels, sharing a slice of their lives, seeing how they live whether rich or poor, and seeing what makes them happy,” Dresser concludes: “We are very fortunate to see places not many people see, whether a pristine rainforest, a desolate desert, a mountaintop, or an old, decrepit basement that hasn’t been seen in years.”

After Earth opens in cinemas around the world in June 2013.