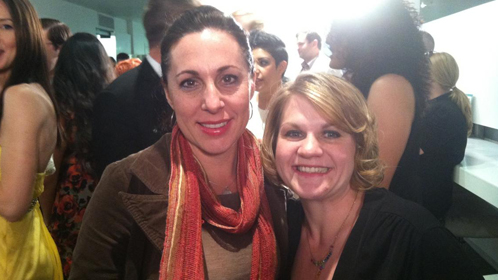 Love in the Time of Monsters, an independent feature film that shot in Del Norte County last summer, had its Los Angeles premiere on April 18th at the Downtown Independent.  Hundreds attended the showing including Humboldt-Del Norte County Film Commissioner, Cassandra Hesseltine, "It was great to see such a large turnout and to see Del Norte on the big screen!"

For more information regarding Love in the Time of Monsters, visit http://tbcfilms.com.

Cassandra Hesseltine with Del Norte resident Jenny Young, who assisted with casting and had a small role in the film.

Ellen Schaub, owner of the Patrick Creek Lodge where most of the filming took place;Michael McShane, actor; and Cassandra Hesseltine.